In the late fall of 2018, the ZigBee Alliance hosted a gathering of IoT industry leaders (Hive), including other IoT standards organizations, to get together and have a frank and open discussion about the Internet of Things; what is the current status, what are the big challenges ahead?

OneDM is solving the problem of lack of a common data model for IoT and IoT devices. Each IoT standards organization, and many IoT platform vendors, have created their own version of an IoT data model framework, each with a bespoke meta-model and representation language. Some have used XML serialization, some JSON, and some have created formats based on other data languages and tools, such as OpenAPI (Swagger).

Despite the divergence of representation languages, the underlying meta-information-models are strikingly similar, conceptually and semantically. They mostly vary syntactically and use diverse vocabulary constructs to represent similar concepts. The devices and functionality being modeled are also very similar and are described at a similar level of abstraction across the field.

The OneDM group decided to undertake a comprehensive review of the state of the art in IoT data models, to see if a common data model could be based on a down-selection from the existing IoT data models. While many of the models that were evaluated have strong suits, it was concluded that no single data model was sufficient to form the basis of a common IoT data model across industry. The more mature models have insufficient coverage across application domains, and the tools and formats being used are not well enough developed in any one area to meet the broad set of requirements.

Based on the industry review, the OneDM group decided to split the work into two phases, first the development of a common modeling framework and language that can describe and represent all of the existing IoT data models with an extensible architecture, offering good support for modern tools, and being friendly for developers. In this phase, we have subjected the proposed language and framework to a pressure test, representing models from diverse sources to identify common optimizations and common design patterns that need to be supported.

The first phase result is the Semantic Definition Format (SDF) and related tools and frameworks to manage the contribution of data models from diverse sources, and collection of these data models in a single place.

What is the relationship of OneDM to other IoT standards organizations? How is OneDM not just another competing IoT standard?

The purpose of OneDM is not to compete with any existing standards body, but rather to provide a common set of tools and models that can be used by all bodies and organizations. Rather than attempting to provide a “better” alternative, OneDM sets out to bring forward the best of several contributing organizations, and then provide the resulting converged models and underlying tools back for everyone to use.

The tools and formats developed by OneDM are a collaborative work product of several IoT organizations and embody the best thinking in IoT data modeling. This is enabled by the contributors’ agreement to make it easier for our collective markets to develop and grow based on a common interoperable technology instead of trying to compete on data models. We decided to collaborate where there is little differentiation to be exploited, and compete where we can find more value in developing new system features.

OneDM will be open for anyone to join and contribute, and all of the tools and models will be available under open source license terms.

How do I as a developer use OneDM?

OneDM provides a modeling language, Semantic Definition Format (SDF), and provides access to a body of contributed IoT data models that you can use to build IoT devices. OneDM provides some basic tools to enable you as a developer to define new models, translate models to and from other SDO formats like LwM2M XML/MOD files or OCF OpenAPI files. The models and tools are all available under the BSD 3-Clause license.

As an organization or vendor, you can use OneDM to host a privately-managed repository where you can manage your own online stable namespace within OneDM for your own definitions, whether you ultimately intend to converge them in OneDM or not.

How do I contribute new definitions to OneDM?

IoT definitions can be uploaded to OneDM by making pull requests of SDF files to a OneDM repository. Initially, OneDM hosts two repositories, the playground for work on convergence of common definitions, and an exploratory repository to work on new language features, extension points, and design patterns. Additionally, new OneDM repositories will be created for definitions to be managed by organizations outside OneDM.

As OneDM moves into the model convergence phase, you can contribute proposed definitions and features and participate in the model down-selection process that will be conducted in open meetings and teleconferences.

What license is oneDM using for its data models?

All models contributed should have BSD-3 licence. In this way the in and out licence of the acceptance process will have the same licence.

How do I get involved in the development of OneDM?

As an independent organization or developer, you can participate in the open OneDM meetings and teleconferences, submit Github issues and make pull requests, and in general contribute freely to the development of OneDM as an open source community project subject to OneDM project governance policies.

There are so many IoT languages and data formats. Why did OneDM create a new format (SDF) rather than reuse an existing format for IoT data models?

The OneDM prior art review considered at least 6 different languages and formats for SDF. None of the existing formats covered the requirements well enough to warrant direct adoption. The requirements include:

Why is SDF represented in JSON and not JSON-LD for better semantic integration?

How does the SDF terminology relates to other organizational usages?

Is there a video tutorial? 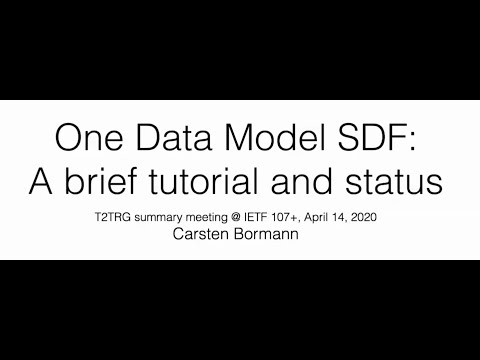 Note that the tutorial uses the old prefix odm instead of sdf.

Is there a presentation available?